At Collision: You’re hustling, not getting hustled

“Tomorrow is all about who hustles most.”

That’s what Jason Calacanis told me the night before TechCrunch 20. Now Jason and others are oversimplifying the costs of getting attention and throwing shade on startups paying to exhibit. The team at the recent Collision Conference in Las Vegas got our attention and created a rich environment for us to connect with other startups and investors. We paid our entry fee. We went. It worked.

Just as it did when I paid to exhibit at TechCrunch 20, co-created by Jason Calacanis.

TC20: Startups had to apply to be selected. Those that didn’t get selected for the top 20 were offered discounted tickets for the demo pit and a chance to get on stage by collecting tokens.

I was working at Zappos at the time, and the startup I was building on the side was called Swamble. It was a peer-to-peer betting app for the mobile web.

We made it to the final round of selections and landed a phone call with Mike Arrington. After showing Mike the product and traction we were getting, he decided we were too far along and there was too much chatter about it online to launch on stage, so he decided it was better for him to write a post about it. He would be in touch with us about a spot in the demo pit.

Two hours later the post was online. Hundreds of signups were rolling in and people were using it. Back then a post by Arrington on Tech Crunch was like being on the top of Product Hunt today. Our servers lit up.

Later that evening I got an email from Heather about the demo pit. This ticket was not free. It was merely discounted 50%. 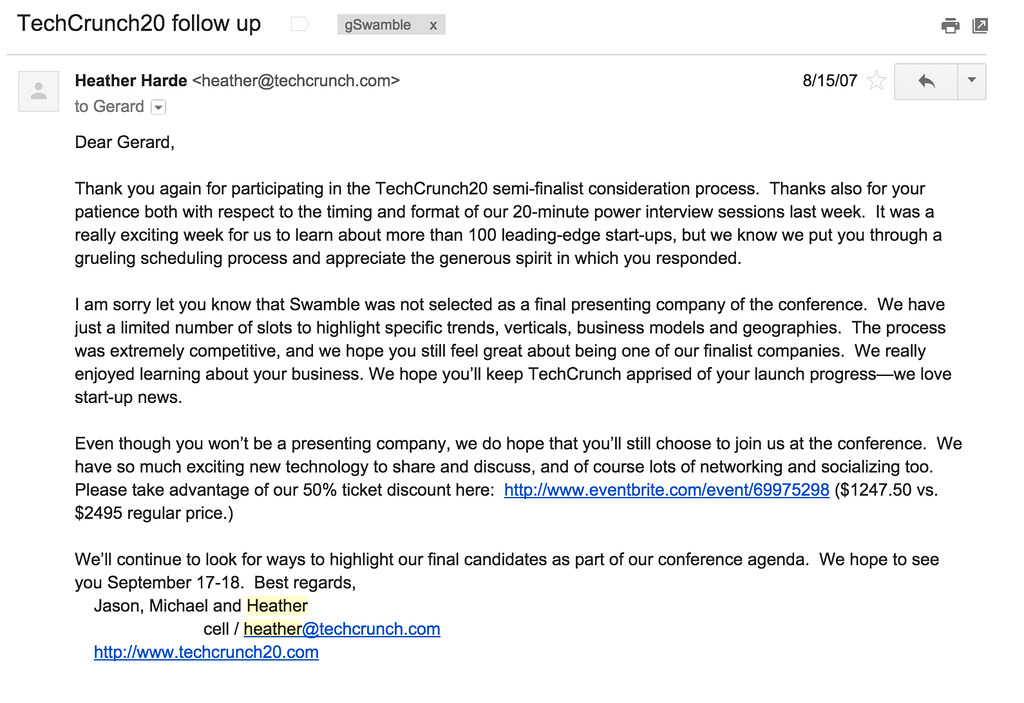 The night before the conference, Scott and I walked over to The Palace Hotel to see if anyone was lingering around. I spotted Jason standing on Market Street waiting to cross. This was the moment I first learned about hustle. Debating with Scott… “Dude, That’s Jason. We gotta go talk to him.” “You sure man?” “Yeah, that’s definitely him. Shit, he’s walking away. Let’s go.”

We introduced ourselves and asked to walk with him. He was cool. We walked through the Financial District to Chinatown. I pitched him and told our story. That night Jason gave me the some of the best advice I’ve ever received as an entrepreneur.

People aren’t going to come to your table. You need to go get them. Tomorrow is all about who hustles the most. Do whatever it takes to meet as many people as possible and sell them on your company.

And so I did. I met Jeremy Schoemaker, and he loved what we were doing. We were spitballing ideas over lunch, and I met Nicole Jordan. I also met Paige Craig – he and his team tried to recruit me as an engineer. He’s now a great friend of mine and became one of the hottest angel investors in the country. He recently launched a new venture fund. You should join his syndicate on Angel List.

Nicole, also now a great friend of mine, organized a dinner over tequila that night. That dinner sparked friendships, partnerships, future deals, and a lifetime of more friendships and epic experiences.

Fast forward to 2015. I’m in Austin at SXSW (another thing it’s become cool to hate on despite being the pinnacle of bizdev hunting grounds), and I get an email saying Revelry has been accepted into Collision and it’s time to make a decision. It’s not free either. The cost is $1,950 and includes 3 tickets and a hotel room.

Yes, they had the word “free” in their marketing copy. Yes, they sent a ton of emails. Yes, they promised an epic experience. They absolutely delivered. They provided a perfect storm of an environment, full of opportunity. But you couldn’t just wait around for it. You had to go out and get it.

Just like at TC20, we arrived at registration early, hoping to meet the organizers. And the first person I run into is Paddy. We talked for a minute and then joined him on a walk to downtown. Eerily similar to my experience with Jason. Paddy was super chill and we had a great conversation.

Demo pit day. High energy, fast moving, lots of traffic by the booth. Stopping people as they walked by, meeting people at the coffee stand, whatever it takes. Pitching and being pitched all day long. Everyone seemed upbeat and genuinely interested in making new connections. Hundreds of new relationships were formed. Any one of which could be that key connection we leverage for years to come.

And, throwback time, Nicole and Paige were there. The collide crew set up office hours for us with an investor from Formation 8 who genuinely dug what we were pitching. We confirmed a follow up meeting on another day with his team right then and there. We met various media people and on Tuesday night had drinks with Steve Bertoni of Forbes.

I wasn’t on their end of crazy stick, but I don’t think their lives were actually in danger. I mean, you gotta watch out for the geek wielding an iphone laser sounding machine… So maybe some of their ideas were terrible, but at least they were on top of their hustle game. Imagine how many good ideas you didn’t see because the founders were glued to the demo table hoping you’d pass by, while the hustler pitching Twitter for dogs to the bathroom line got your attention.

You can’t win if you don’t play. Quit bitching. Tomorrow’s about who hustles most.